A full account of Workman Clark’s activities during the Great War would make a big book…
(Shipbuilding at Belfast, published in 1933 by Workman Clark (1928) Ltd.)

The research published in this website does not aim to be a full account of the company’s involvement in the Great War, nor does it aim to be a history of the company. We aim to provide a deeper insight into the involvement of the Workman Clark shipyard and, importantly, its employees – whether at home or on military service – in the successful execution of that war.

This research provides an historical overview of the company’s formation, development and success, and eventual decline to liquidation in the 1930s. It also includes details of the company’s philanthropic support for local war charities during the war, its commitment to the well-being of the relatives of employees on military service, and its financial support of the Government’s war loans. In order to provide a meaningful understanding of values quoted, an historical inflation calculator has been used to give an indication of the current equivalent. During the course of the Great War, the value of sterling fluctuated dramatically, as this table shows:

The website documents the men who died in workplace accidents at the shipyard during the war and other aspects of being “On War Service” at home, including some of the world records set by employees.

In addition, the website provides details on a range of the 1,396 vessels that Workman Clark built, repaired, or overhauled for the Admiralty during the course of the war. There are details about merchant ships which, although not directly engaged in the “war effort”, were sunk by German U-Boats. The website details merchant vessels built by Workman Clark that were requisitioned by the Admiralty for use in the war effort. A full chapter deals with the SS Otranto disaster in October 1918 and, in particular, the important part played by Belfast and its citizens, which has been largely overlooked in other publications.

An important element of this website documents the personal and military history of Edward Workman, the only son of Frank Workman, co-founder of the Belfast Shipyard, utilising the information, photographs, and personal letters contained in the Edward Workman Archive. Whilst the firm would probably have still erected a memorial to the men of the Belfast Shipyard who fell in the war, it would probably not have been as imposing or as artistically important but for the death of Edward Workman. The memorial to the Belfast Shipyard workers, which was commissioned by the Workman family, is the last physical evidence of the existence of this important shipbuilding company – at one time, the fourth largest shipyard in the world – which played a significant role in the war effort and, indeed, the local economy.

However, a significant portion of this website, and rightly so, is dedicated to the men who left the shipyard to serve their King and their Country, whether on land, at sea, or in the air. The company’s war memorial provides important basic details – Ranks, Forenames, Surnames, and Units – not found on many memorials for commercial or industrial organisations. This website includes extensive information for 133 of the 136 fatalities and biographies on a selection of the fatalities commemorated on the war memorial. The biographies relate to fatalities from different theatres of war and from different phases of the war, documenting the oldest and youngest fatalities and the first and last fatalities. It also documents the story of David John McCarron who is named on the company’s war memorial but whose death was overlooked when the official war fatality records were being compiled. As a result of the research for this website, documentary evidence was submitted to the “In From The Cold Project” and David John McCarron is now commemorated as an official war fatality by the Commonwealth War Graves Commission. The website also draws attention to the men who served and survived the war and includes a selection of personal biographies. For example, it includes details about men who returned home with life-changing disabilities, men who had suffered the humiliation of captivity, men whose acts of courage were recognised by gallantry awards from grateful governments, both domestic and foreign. The website includes details on fatalities who worked at Workman Clark prior to the war but whose names are not recorded on the company’s war memorial. It is probable that these men were not employed at Workman Clark when the war started but, in the absence of key records, it is impossible to definitively state why the names of these men were not included on the memorial. Whatever the reason, we feel that it is important to acknowledge their deaths in this website.

In researching the 136 fatalities named on the Workman Clark Shipyard Memorial, the denominational affiliation of 117 men has been identified. The largest representation was for the Presbyterian denomination (71 fatalities), followed by Church of Ireland (32), Methodist (8), Congregational (3) and one fatality each from the Roman Catholic, Baptist and Brethren denominations. Like both of the founders of the shipyard, much of the workforce would have had a strong Scottish heritage.

To mark the 100th anniversary of the unveiling of the Workman Clark Shipyard Memorial and to pay tribute to Ted Workman and the many other Workman Clark men who gave their lives in the Great War, a service of remembrance was held at the Pumphouse on 8th August 2019. The service was attended by descendants of the two founders of the firm, Frank Workman and George Clark, and was conducted by the Reverend Henry Hull, Dean of Down. It included readings of extracts from the speeches made by Sir Edward Carson and Sir George Clark at the original unveiling. A portion of scripture from Ted Workman’s Trench Bible was read and Nigel Henderson gave a short talk on the Wee Yard. Maureen McKinney read a very moving letter of gratitude from Mrs Ellen Lemon, who had attended the unveiling as her son, William, was one of the fatalities. Finally, a wreath was placed at the Memorial by David Lindsay, Frank’s great grandson, and the Lindsay family hosted an excellent lunch in the HMS Caroline museum. An information panel outlining the history of the Wee Yard and Ted Workman’s short life had been erected adjacent to the memorial just a few days before the service.

Frank Workman, a member of the East Belfast Unionist Association, and George Clark were prominently involved in opposing Home Rule for Ireland, and this was reflected within the workforce. On 30th March 1912, the caption to a newspaper photograph in the Belfast Evening Telegraph recorded that over 700 men from the North Yard had formed a Unionist Club and were each day receiving instruction in squad drill. The caption also recorded that this Unionist Club, accompanied by pipers and a band, had marched from Spencer Basin to York Street, attracting a large crowd of interested spectators along the route. 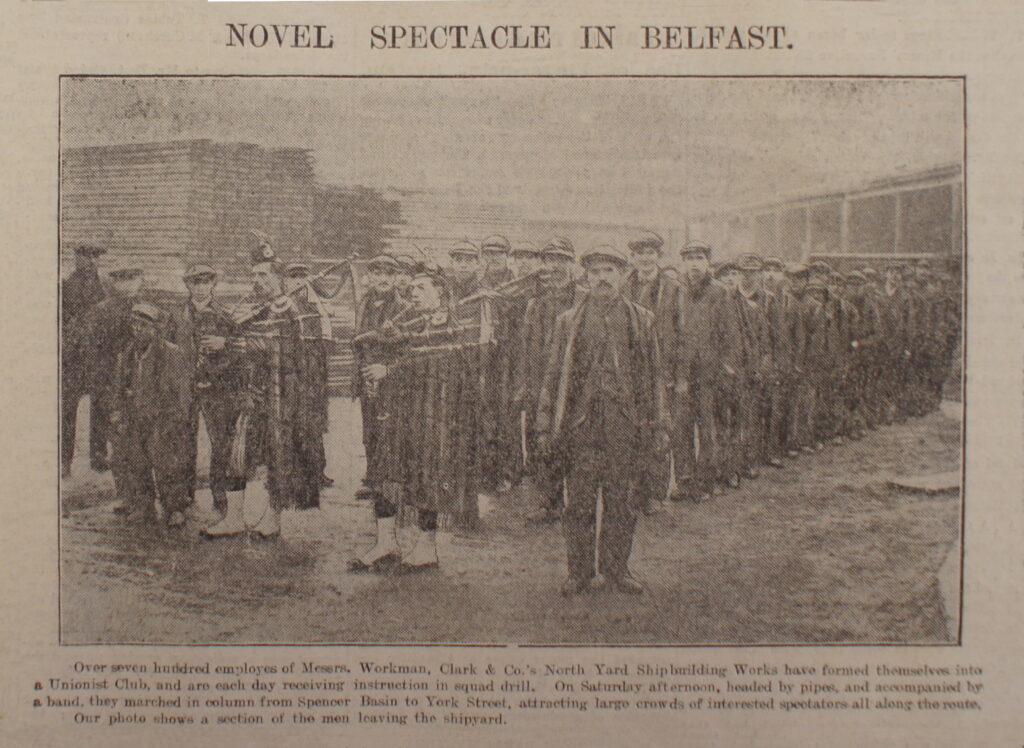 This was in preparation for the club’s attendance at the Balmoral Review on Easter Tuesday 9th April 1912 at the Royal Ulster Agricultural Showgrounds. This demonstration against the imposition of Home Rule was attended by over 100,000 people, many of them belonging to the recently formed Unionist Clubs. Later, a unit of the Ulster Volunteer Force was formed within the shipyard and the unit’s drill sergeant, William James Lyle, died whilst on active service.

This chronicle of the part played by the “Wee Yard” in the Great War is not a full account but it is a comprehensive interpretation of how the management, staff and workers of an almost forgotten shipyard helped to shape history.

Unless stated otherwise, all newspaper photographs of servicemen were printed in the Belfast Evening Telegraph or its regional editions, the Larne Times or the Ballymena Weekly Telegraph. The images are used by courtesy of the Great War Ulster Newspaper Archive.

Next: Workman Clark: A Shipyard is Launched