The story of Workman Clark’s shipbuilding yard is one born of courage, confidence and connections. Often described as the “Wee Yard”, this was only in comparison to Belfast’s larger shipyard, Harland & Wolff. In an unlikely scenario, the young founders, Frank Workman and George Clark, relatively inexperienced shipbuilders, became partners to create a shipyard worthy of note that was to last 56 years. 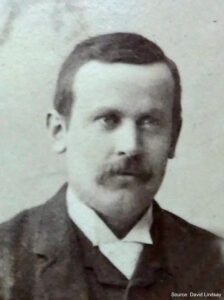 Frank Workman was the youngest of the 15 children born to Robert Workman and Jane Workman (nee Service) of “Ceara”, Windsor Avenue. His parents were from Saltcoats in Lanarkshire and had come to Ireland in the early 1800s. His father was a successful muslin manufacturer and Frank was educated at the Royal Belfast Academical Institution. Subsequently, in 1873 at the age of 17, he became a premium apprentice at Harland & Wolff. One year after completing his 5-year apprenticeship Frank decided, at the age of 23, to establish his own shipyard on a four-acre site on the County Antrim side of the River Lagan, subsequently named as the “North Yard”. This looked directly across at his former employers who were unlikely to be pleased that he took with him a fellow employee, William Campbell, to be his manager. That displeasure must have been further compounded by an invite extended to George Clark (another Harland & Wolff premium apprentice) to become his business partner in April 1880. Both young men had the advantage of their families’ connections (and money) to Glasgow shipping company, City Line. Frank married Sara McCausland on 10th June 1885 at Fisherwick Place Presbyterian Church. Sara was a daughter of John Killen McCausland of Lennoxvale, a tea, sugar and seed merchant who died the following year, and Sara Maria McCausland (nee Munk) who died in December 1916. Frank Workman represented the Victoria Ward on Belfast Corporation and became the Chairman of the Corporation’s Gas Committee. He also held the positions of High Sheriff of Down and Belfast and Deputy Lieutenant for the County Borough of Belfast. In addition, he was a Vice-President of the Central Presbyterian Association in 1916 and donated £10,000 (the equivalent of approximately £579,000 in current terms) to the fund for the construction of the Presbyterian War Memorial Hostel. Frank Workman died at the family home in Strandtown on 14th November 1927, aged 71, and was interred in Belfast City Cemetery on 17th November. 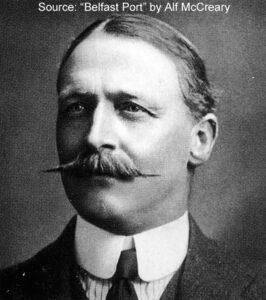 George Smith Clark was born on 8th November 1860 at Abbey Burgh, Paisley, Scotland to James Clark and Sarah Clark (nee Smith). His father was a partner in the family thread manufacturing business in Paisley and his mother was the daughter of George Smith, who had founded the City Line shipping company. After completing his education at Merchiston Castle School in Edinburgh, George became a premium apprentice at Harland & Wolff. George married Frances Elizabeth Matier on 28th September 1881 at Fortwilliam Park Presbyterian Church. On his marriage, he became a director of his father-inlaw’s linen manufacturing firm – Henry Matier & Company of Clarence Place in Belfast. George was a founder member of the Ulster Unionist Council in 1905 and was the Member of Parliament for North Belfast from 1907 to 1910. He also served as Deputy Lieutenant for the County Borough of Belfast and was a Senator in the Northern Ireland Parliament from 1925 until his death. George Clark was Chairman of the Great Northern Railway Company (Ireland) and was a director of the Bank of Ireland. George Clark was rewarded for his Admiralty work by being knighted and receiving the title of the 1st Baronet of Dunlambert. Sir George Clark was a keen Freemason and, in 1938, a newly formed lodge (No. 669) was named the Sir George Clark Memorial Lodge in his memory. Sir George Smith Clark died at “Dunlambert” on Fortwilliam Park on 23rd March 1935 at the age of 74 and was interred in Belfast City Cemetery on 26th March.

Over the course of the next number of years, work slowly increased and the shipyard’s reliability and expertise at producing vessels of a high quality ensured that its orders books grew. Despite what may have been viewed as rivalry between the two major Belfast companies, Workman Clark and Harland & Wolff concentrated on different areas of shipbuilding. The major difference that set them apart was Workman Clark’s reputation as chilled and refrigerated cargo shipbuilding specialists.

In 1894, when another Belfast shipbuilding firm, McIlwaine & MacColl, went into liquidation, its shipyard and engine works, which was adjacent to Harland & Wolff, were acquired by Workman Clark, increasing the firm’s total area to 40 acres. It was around this time that the terms North Yard and South Yard came into usage as the acquisition gave the firm shipbuilding yards on both sides of the River Lagan. It heralded a major expansion in the number of vessels that could be built and, of course, a larger workforce.

Like Harland & Wolff, at the outbreak of the Great War, the “Wee Yard” saw a slump in its orders and laid off workers as Admiralty contracts with other shipyards meant that resources were diverted. Soon government requests made their way to the Belfast shipyards and their workload and output increased greatly. By the end of 1915, Edward Workman reported that 25% of the company’s orders were for war-related work. The Workman Clark workforce grew to the company’s peak of 12,000 during this period. Harland & Wolff sub-contracted the construction of two monitor vessels (M32 and M33) to Workman Clark.

In its 1933 promotional publication, “Shipbuilding at Belfast”, Workman Clark boasts of its “On War Service” by stating:

During that period 1,396 vessels were handled either for building, repairing or overhauling. These ranged from battle-cruisers to patrol boats, and from stately liners to boom defence and “Q” boats.

It was during this war period in 1918 that the world’s riveting record by one of its employees, John Moir was set. His was not the only achievement to receive much acclaim as the shipyard could boast the completion of an 8,000 ton vessel in less than four days after its launch.

Post war, despite a healthy order book, Workman Clark began to look outside both of their families for financial backing and commitment. Negotiations began in 1919 with Northumberland Shipping Company whose chairman, Robert Alfred Workman was Frank’s nephew. Shares were issued which turned out to over-inflate the company’s worth and this would prove to be of concern by the time both founders resigned from the board in 1921. It was discovered that Northumberland Shipping had used some of the funds raised by selling shares to pay off their own loan.

Workman Clark now had a huge interest debt and by 1923 a general slump in shipbuilding affected them badly. By 1926 they were making a loss and some shareholders were pressing charges against Northumberland Shipping Company for the “shady dealings” around the shares’ sales. Sadly, Workman Clark had no choice but to place the business into liquidation. The receivers managed to persuade William Strachan (the Company Secretary) to take over as Chairman and “Workman Clark (1928)” was established.

Their luck seemed to be changing as an air of optimism began to return by the spring of 1929. However, in October of that year the American stock market crash dealt another blow. In 1930 it was even suggested a merger with Harland & Wolff (who themselves were in difficulty) but this was rejected. This left no choice but to shut the yard for a couple of months. To add further to their precarious position, a disaster struck the yard when in November 1931, whilst carrying out repairs to the 20,000 ton MV Bermuda, it was gutted by fire and sank in her berth. Rather than being sued by the owners, Workman Clark decided to purchase the wreck. Unfortunately, with no further new vessels on their order books and only small repair jobs, the yard was doomed to close. Finally, in 1935, the North Yard closed, the firm’s equipment was auctioned off and the South Yard was absorbed by Harland & Wolff. It was around this time that the centre piece of the Workman Clark Shipyard Memorial was relocated to its current location on the Pumphouse Wall.

Only two of the ships constructed by Workman Clark survive to this day. The Polly Woodside (1885) is a three-masted iron barque preserved as a museum ship in Melbourne, Australia. The other is the M29-Class Monitor HMS M33 (1915), whose history is covered extensively here https://www.thebelfastshipyard.org/workman-clark-ships-in-the-great-war/ .