In 1908, the Workman Clark shipyard commenced the construction of a new ship (Yard Number 278) for the Orient Steam Navigation Company for use on the UK-Australia route. Ship 278 – SS Otranto – was launched on 27th March 1909, completed on 20th July 1909 and made her maiden voyage on 1st October 1909. Otranto had an overall length of 555 feet 6 inches, a beam of 64 feet, and a moulded depth of 38 feet 8 inches. She had tonnages of 12,124 gross register tons (GRT) and 7,433 net register tons (NRT) and was fitted with two four-cylinder quadruple-expansion steam engines, each driving one propeller. The engines had a total power of 14,000 indicated horsepower, which gave Otranto a top speed of 18 knots and she had a capacity for 235 first-class, 186 second-class and 696 third-class passengers.

On 4th August 1914, Otranto was requisitioned by the Admiralty and converted to become an armed merchant cruiser, being fitted with eight 4.7 inch guns. A rangefinder was installed on the bridge and her fore and aft holds were refitted as magazines. Half-inch steel plating was added to protect her steering gear and her interior cabin bulkheads and glass ventilators were removed to reduce damage from splinters. Her furniture was removed to make room for the mess decks, needed to feed large numbers of troops and sailors. An operating room and a sickbay were installed amidships. She was commissioned as HMS Otranto on 14th August and was primarily used to search for German commerce raiders. She played small roles in the Battle of Coronel in November 1914, when the German East Asia Squadron destroyed a British squadron, and in the Battle of the Falklands the following month, when a British squadron annihilated the Germans in turn. Apart from brief refits in the UK, Canada and Australia, she remained on this duty until early 1918 when she became a troopship. 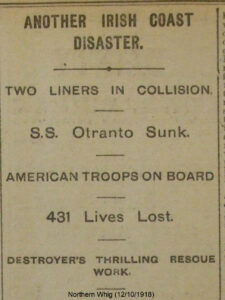 Serving as the flagship for Convoy HX-50, Otranto departed New York on 25th September 1918 and, six days later, she accidentally collided with the French fishing schooner La Croisine off Newfoundland while the latter was returning home to St. Malo with a full load of cod. Captain Ernest Davidson, who was also commodore of the convoy, ordered the convoy to continue while Otranto stopped to rescue the 37 survivors. The following day, a soldier died from influenza and was buried at sea. The convoy encountered a Force 11 storm which prevented accurate navigation and the convoy was forced to proceed by dead reckoning. 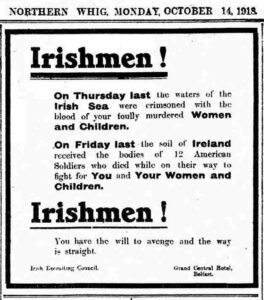 On the morning of 6th October, the Otranto Watch Officer identified the visible coastline as being that of North-East Ireland and turned north. HMS Kashmir, another liner turned troopship, was proceeding on a southerly course and struck Otranto on the port side amidships, a few miles off the rocky coast of the Isle of Islay. The impact punched a hole that was 20 feet by 16 feet in Otranto, from below the waterline up to the boat deck. The engine room flooded shortly after the collision and Otranto lost all electrical power and began to drift towards the cliffs of Islay. The water pressure caused other bulkheads to collapse, quickly flooding other spaces below the waterline and giving the ship a massive list to starboard. The impact also damaged many of the remaining lifeboats on that side. The crew attempted to use collision mats to cover the hole in the ship’s side, but it proved to be too large. Kashmir’s bow was crushed by the impact, although she was able to steam off when a wave forced the two ships apart soon after the collision. About a half hour after the collision, the British destroyer HMS Mounsey arrived after searching for the convoy during the night. Despite the inherent danger and Davidson’s order to stand clear, Lieutenant Francis Craven, positioned the Mounsey on Otranto’s lee side to allow men to jump aboard from the stricken liner. Local newspapers reported that Mounsey rescued 300 American troops, 266 of the Otranto’s crew, one YMCA morale officer and 30 French fishermen. Although Mounsey had been damaged in the rescue operations, it docked at Belfast without further mishap. The rescued men were accommodated at Victoria Barracks in Belfast and at the Soldiers’ & Sailors’ Club in Waring Street.

The best estimate of the casualty toll from the disaster is a total of nearly 470 men, including 358 American Army personnel and six French fishermen. The Commonwealth War Graves Commission records 94 fatalities for HMS Otranto on 6th October: 49 from the Mercantile Marine Reserve, 35 Royal Naval personnel and ten men from the Royal Marine Light Infantry. The disaster came shortly after UB-123 had torpedoed and sank RMS Leinster with the loss of over 500 souls, many of whom were civilians, and local newspapers linked the two events in a recruiting advert.

Two of the ship’s crew who died were from Belfast. Able Seaman Edwin Edmund Edmonds, Royal Navy, was born on 30th June 1891 at Ballyobegan near Kircubbin to William Edmonds (a Mate on a Light Ship) and Catherine Edmonds (nee Barnwell), being the second youngest of their seven children. Edwin was a plumber when he joined the Royal Navy on 24th March 1910 and was 27 years old when he died. He is commemorated on the Chatham Naval Memorial. William and Catherine Edmonds lost two other sons in the Great War. Private William Barnwell Edmonds, Royal Marine List Infantry, died of wounds at 11th Casualty Clearing Station on 13th November 1916, aged 28, and is buried in the Varennes Military Cemetery in France. Rifleman George Edgar Edmonds, 7th Battalion Royal Irish Rifles, was Killed in Action on 8th August 1917 and is commemorated on the Tyne Cot Memorial in Belgium. The Edmonds brothers are commemorated on the memorial tablet for St Phillip’s (Drew Memorial) Church of Ireland.

Trimmer Arthur Greer, Mercantile Marine Reserve, was born on 25th July 1899 at Emerald Street in the Ormeau district to Arthur Greer (a Gas Works labourer) and Catherine Greer (nee Lyons), being their eldest son. He was 19 years old when he died and is commemorated on the Plymouth Naval Memorial. His father, Arthur, was on active service at the date of his son’s death and his mother was living at Harland Street.

Three of the French sailors succumbed to Pneumonia at the Belfast Union Workhouse Infirmary and were buried in Milltown Roman Catholic Cemetery. Jean Marie Bougear (16) died on 11th October, Guillaume Denier (32) died on 13th October, and Louis Chalon (17) died on 21st October. In January 1919, Sir William Coates, the Lord Mayor of Belfast, unveiled a memorial to the three French sailors that had been erected in Milltown Cemetery. The memorial took the form of a Celtic Cross with carved panels and a Dove of Peace in the centre panel. At some stage over the intervening years, the memorial has been damaged and all that remains is the base with the inscription and a portion of the shaft of the cross. The inscription names the men and finishes with: This memorial has been erected by sympathetic Ulster friends of France. 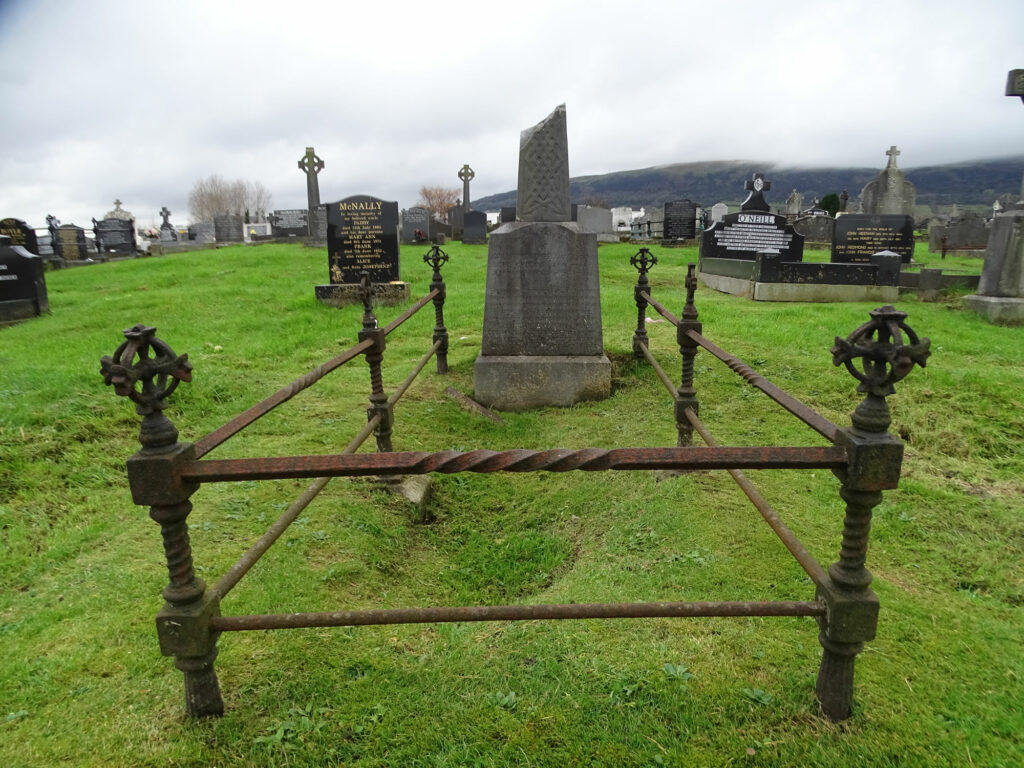 Next: On War Service